About This Site
It's Clear That It Is Bilingual
Spanish-English

Here, on this site, Christian Peace Ensemble, are the keys to discover the usual mistakes socially established, which unfortunately are so common.

This site was born in Spanish language. From the beginning I had the idea to make it bilingual (Spanish-English), but only until the end of 2019 I decided to do it, little by little. There are many translations, first rough and then polished. I ask the English speaking reader to have some patience.

The site and its structure favor the search and achieve peace. It is about having a serenity or inner calm. In what follows, already on this page, we will begin to see how the structure of this site favors the search and the achievement of peace.

Peace is found on many levels: personal, family, work, social, national and international, or global, as it is customary to say. Peace is not only the absence of war or evil, but the presence of a very important good for each and every one of us.

Peace begins within each one, and since it is a good, and the good is diffusive of his, it turns out that personal peace is spreading towards others and is spreading towards ever greater social levels. It is not the case that it happens the other way around: that social peace is the cause of which it is personal and internal. Peace is given by God within the soul of each person. Even so, it is important to ask for it and look for it intelligently and diligently. God does not usually give peace as a reward for laziness.

The following topics appear in the initial or main page of this portal in the vertical menu on the left:

These realities must be duly assembled or harmonized in order to achieve a peculiar ensemble that facilitates the achievement of peace; Of course, with God's help. In all these realities there are many things that have historically and socially been established, and in which there are many errors; and these are a serious impediment to achieve the peculiar ensemble required by peace. That is why it is so important that we have the courage to analyze and discover such errors, and then act accordingly. Let's analyze it a bit.

If we click with the mouse (click) these vertical menu topics, we will go to the pages where a first presentation of each of them is made. By the way I have finished all these presentations, perhaps with repetitive annoyance for some readers, saying the same thing almost textually. For example, when talking about values, it says:

Gradually serious errors have also been established in the field of values. It is necessary to discover these errors and try to correct them. We must do it initially at least as far as we are concerned, otherwise it will be difficult to carry out the due process that allows us to achieve peace.

I did so to highlight the fact that family errors, educational errors, and other realities mentioned, all have a similar negative effect that deteriorates our peace. The breakdown of these realities is not intended to be exhaustive, since many other realities can have a similar effect, especially in special situations; but certainly those mentioned are the main ones, because they always have such a negative effect, and they have it in a way that affects many aspects of our life, and also affects the other key realities.

For example, mistakes in our education affect our family, our work, our society, our world universe, and the way we conceive our values and our religion. I invite the reader to consider the way in which each one of these realities affects the others, and in general our life.

That is why the failures or errors of any of these important realities prevent us from achieving the peace we so long for, or that we achieve it in a satisfactory way. The proper ensemble of all of them is very important. That is why I did not want to talk about ensemble, but I preferred to use the term ensemble - already accepted by the Spanish Language Academy -, which is usually used to designate the peculiar harmony of certain musical ensembles.

I have insisted on this because many people are willing to acknowledge that there are errors or failures in one or several of the aforementioned realities, but not in all, since they may be fond of the mistakes of some of them. For example, those who worked hard to improve black schools had resistance that such schools should disappear.

It is also difficult to recognize that there are errors in the values or in the religion that one has received from parents and grandparents, and that he has lived since childhood, as the wars of religion evidently prove. These earthquakes and wars show that peace is lost when religion is left out of the ensemble; and the same happens, to a greater or lesser degree, with the other key realities.

All this problem can be captured in a more lively and concrete way in the series of articles Life became hard, which is offered on this website.

Question. Why does peace have to be Christian?
Answer. Peace does not have to be Christian. In fact, many non-Christians achieve peace. But in peace there are degrees, and peace in fullness is only achieved in the face of the certain hope of happily eternalizing oneself, overcoming death. And that has only been achieved in Christianity, thanks to the fact that Christ, resurrecting, defeated death.

He was born in Guadalajara, Mexico, Catholic, secular and married. He is the creator and administrator of this website.

After studying Electronic Engineering he discovered his vocation for humanities, he obtained a doctorate in Europe, and in a professional manner he has mainly dedicated himself to Philosophy, Pedagogy and Theology. He considers that, even if they are three different university degrees, they are really a three fold universal knowledge, which make up a single profession.

He has never been a priest or religious, but always a layman. This clarification is due to the fact that, in reading his theological writings, some people have thought that he hung the cassock. 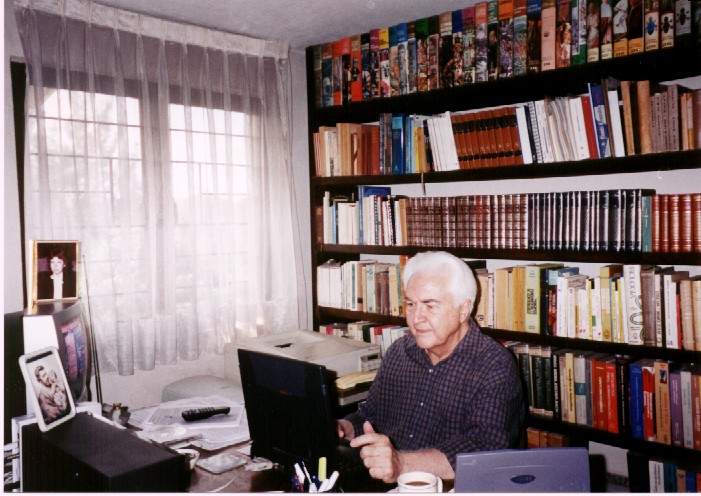